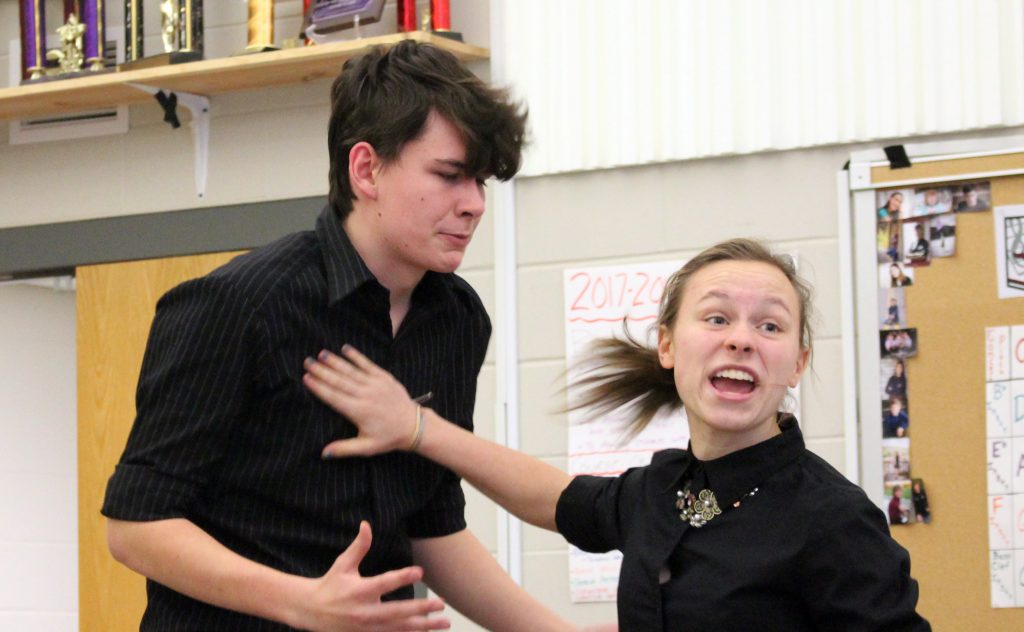 IHSSA consists of member high schools from four districts in Iowa and offers three categories of competition: debate, large group, and individual events. The students competing this weekend are hoping to qualify for the All-State Speech Festival. To qualify, the students must first do well at the District and State tournaments.

Events that students may compete in include but are not limited to Poetry, in which they speak a poem or multiple poems; Public Address, in which the speaker gives another person’s speech; Review, which is a general review of a book, movie, or other published material; and Spontaneous Speaking, a short, made-up speech concerning important issues. At the District Tournament for speech, a judge issues ratings. Every team or individual who receives a “I” rating proceeds to one of the four State Tournaments.

At State, there are three judges. A student must receive an “I” rating and recommendation from two of the three judges, they may continue on to the All-State Festival where the best in the state in each category are showcased.

Students put a lot of time and effort into preparing for speech competitions, not only attending practices with coaches but also practicing at home.

“To prepare for a speech competition, I have speech practice two times a week with one of my coaches. I also practice my events at home in front of friends and family,” says senior Amanda Dragon. Dragon will be performing her poetry selection “Fearful Women,” and will also compete in Storytelling, in which she will be telling the story of “Caps for Sale With a Twist.”

Junior Jeremy Ferguson will be doing an Expository Address on how to make science interesting as well as competing in Spontaneous Speaking. He has rehearsals once a week with his speech coaches as well as practicing on his own time. This is his second year competing in the individual speech events, although he has done large group speech for three years.

Ferguson said, “I first joined speech because I wanted to try something new and improve my speaking skills. I like that speech allows me to gain more confidence in myself while having fun at the same time. My favorite thing is how accepting everyone is of each other and how everybody is willing to work together to get better. I would highly recommend joining speech to other students.”

Senior Martin Benesh agrees, saying “I would recommend speech to all MV students because it provides an outlet for expression.”

This Individual Speech competition is not the only speech contest students have attended this year and it may not be their last. “First we had WAMAC, for individual events, and then we went to District Speech a couple weeks ago.” says senior Samantha Edwards. “Now we have State Speech. If I do well enough at State Speech, I might go on to the next competition, which is All-State.”