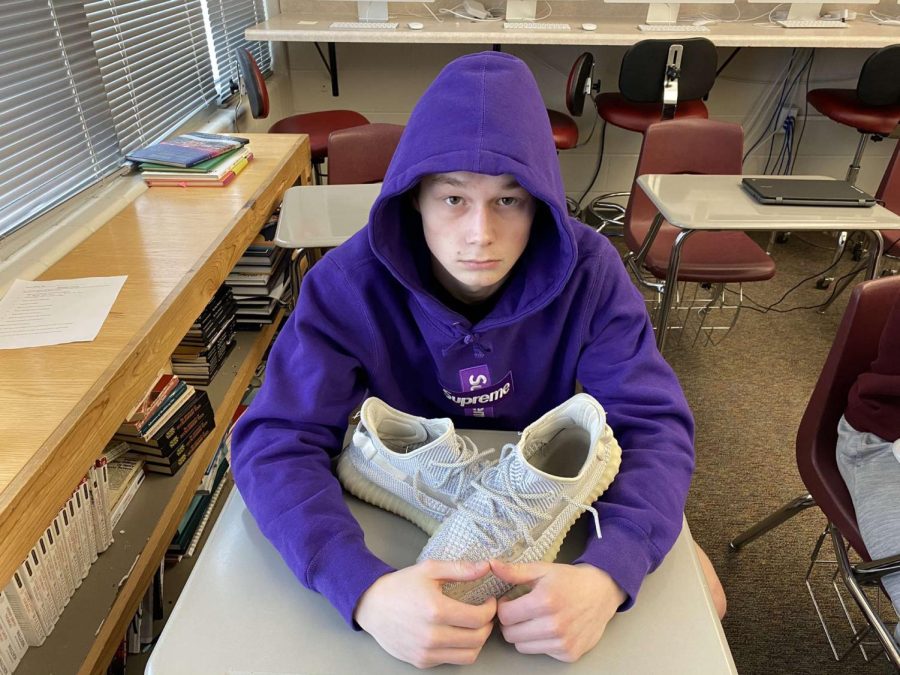 Leo Appleton with his merch

In eighth grade, Leo Appleton was sitting at his laptop playing the shooter game CS:GO with his friends. They were all having a good time discussing different topics, when someone brought up reselling. This intrigued Appleton greatly, and after the game was done he needed to talk to the friend that brought it up. Now a senior, Appleton is making hundreds of dollars on most sales and he has mastered his craft of getting valuable products right as they are released. He is learning how to gauge the value of non-fungible tokens (NFTs), digital files that can be sold and traded – a new product on the reselling market.

Appleton is known for being thorough in everything he has done, from studying for tests in school to learning proper hurdle form in track and field. So obviously it was the same story for Leo when he began reselling. When beginning, he put a lot of time and research into finding a good item that would have a high resell price (In this case, a pair of Yeezy Beluga 2.0’s). When he found the next time the shoes were being sold online, he opened the website and waited, refreshing the page the moment they went on sale. “You can do all the research you want, but if you don’t get lucky enough to be one of the first 100 or so in the queue you won’t get your product,” Appleton said. Luckily for him, he happened to get in fast enough and profited over $200 on his first sale.

However, the business doesn’t always go as smoothly as his first sale. On numerous occasions, Appleton didn’t manage to sneak into the top of the queue and, as a result, his research and time was wasted. Also, in this field, it’s important to always stay on top of prices, as they are ever-changing. A pair of shoes or an item of clothing could be listed at a low retail price and high resell price at one point, and then after buying the product its resale value could drop exponentially. This has occurred a few times for Appleton, and it never feels good when it happens.

On one occasion, Appleton bought two pairs of shoes, but after purchasing, the value went down due to a large amount being released. Because of this, he only made $1.20 from the sale – an amount not worth his time. “It’s very frustrating when this happens because there isn’t much I can do about it,” he said.

Something Appleton has begun researching is buying and selling NFTs. Although he is new in this field and has already lost a lot of money, he has decided to do more research and continue buying and selling these online files. Right now Leo has an NFT that he believes will be extremely profitable in the long run.

Appleton is planning on heading to Iowa State next year to study computer science, but he has stated that he will continue to resell items if time allows. “The research involved is time consuming, so I may not be able to work as frequently as I have been,” he stated. That said, he is very clear that it is something that he would like to continue even beyond college.