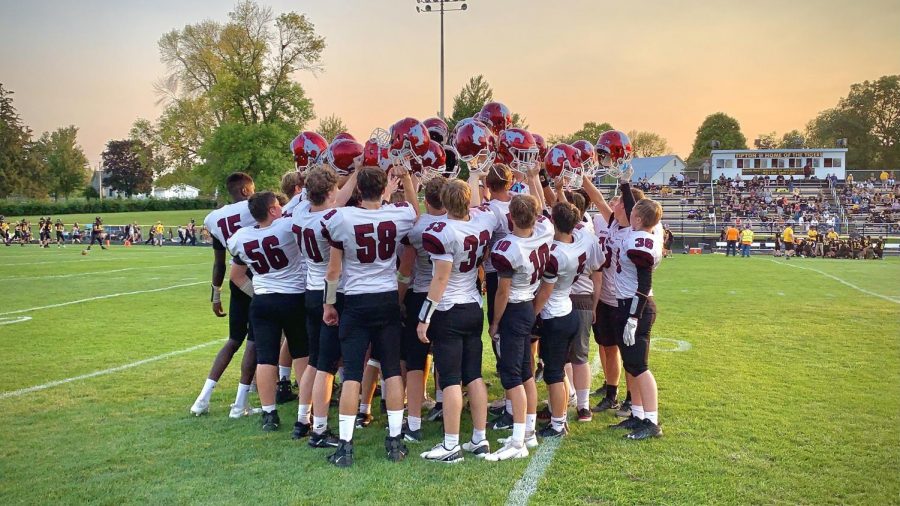 The freshman-sophomore football team gathers after the Tipton game in September.

Although some individuals had some shining moments, the Mount Vernon freshman-sophomore football team lost to Maquoketa last Friday 34-18.

“It was kind of disappointing because they weren’t really much better than us and we should’ve played better,” said freshman Kael Riniker. During the first half, the Mustangs struggled to get anything going offensively while Maquoketa gained yards with ease. However, near the end of the first half, the Mustangs broke through Maquoketa’s defense to get some points on the board.

The breakthrough came from a long touchdown pass from quarterback Watson Krob to wide receiver Ethan Plotz. Krob threw a perfect pass to Plotz who ran a route that fooled the defense and set up an easy touchdown. “Plotz did a good job,” said Riniker. “He ran great routes that confused the defense and made us a threat on offense.”

Early in the second half, Krob struck again with a run in to make it 12 for the Mustangs. The ball was snapped to Krob, he looked for his receivers, but then decided to take matters into his own hands and opted to single handedly drive through Maquoketa’s defense for the touchdown. Later in the second half, Cole Thurn stripped the ball from the Maquoketa offense and ran the ball in for an easy 6 points. This put the Mustangs at 18, unfortunately it was not enough to seal the win. “We had some people out due to injury and one guy got pulled up to varsity so it forced others to play out of position,” said sophomore Tyler Quam. “I think we weren’t mentally ready for the game with new guys in new spots.”