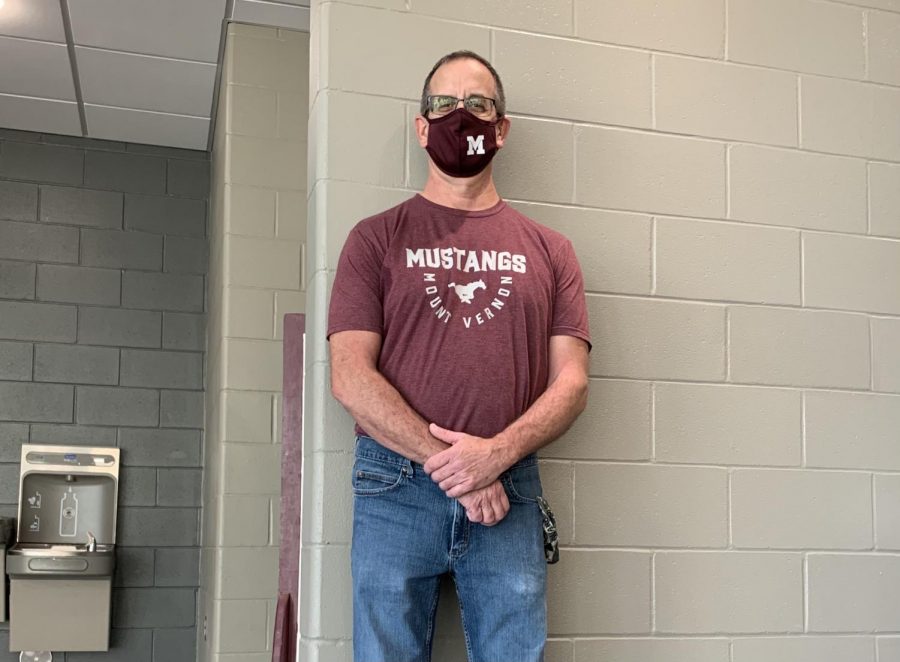 Five a.m. comes along, and the chirping of the alarm starts to blare.  High school custodian Steve Miller is up hours before any student even thinks about opening their eyes. By 6 a.m, he is rolling into the high school. All throughout the day wiping down tables, mopping, sweeping, and sanitizing; keeping this school squeaky clean until 3 p.m., unless there’s an athletic event to prepare for and clean up after.  But that is just the tip of the iceberg into the roles he plays in this school.

Miller graduated from Lisbon High School in 1983. Two weeks later, he was off to basic training for the army. He was what is known as a cable dawg in the military. Communications in the military was a wired phone system in which lines had to travel across land to get communication from place to place. This had to be installed and maintained by certain individuals. He worked as a cable dawg for nine whole years. He returned back to Lisbon and became the custodian at his old high school. He has now been a custodian for 33 years, and working his 14th year at Mount Vernon.

Some people might categorize being a janitor as a boring job. But it is what you make of it. And Steve makes the most out of everything he does.

“When you work by yourself for years, you have to do something to entertain yourself,” Miller said about his contributions that go beyond cleaning. As some may know, Steve makes various creative cakes for students’ birthdays. That actually started with cupcakes at Lisbon. If you were nice to him, you would get a cupcake once your birthday came around.

He upped his game at Mount Vernon. Graduate of 2020, Nicole Theobald, received three cakes during her high school years. “They always had layers with the frosting cutting the middle with strawberries on the top,” Theobald said, “It was really nice knowing that someone cares for students and wants a good relationship with them. I don’t know any other janitor that makes cakes for people.”

Not only are the cakes well made but they make people feel special, and cared for.

“He has lots of fun saying and sounds. He loves to make people laugh,” said instructional coach, Tawnua Tenley, who, like Miller, is a veteran.

You will always find Steve with a smile on his face. He uses jokes and sarcasm to interact with students and spark smiles on all faces. “As long as they smile for a half a second, even if they’re having a bad day, it’s a good day,” said Miller.

He lives to give laughter and joy to everyone around him.

“He will call me funny names or take my water bottle when I’m not looking. It really is a bright spot when I’m having a bad day,” said senior Alice Conroy.

“Steve Miller is not only dedicated to his actual job but manages to know and interact with just about every single student that comes through the building. He attends practically all of the sporting events and other events as well, and he manages to do it all with a smile,” said Tenley.

He has lived in Lisbon his whole life. He spends his time gardening plants and flowers. His front yard is flooded with colorful flowers. He also loves photography and baking. He is surrounded by people at school. It is at home where he can sit back and relax. He does have a couple cats to keep him company as well.

Steve Miller is a personable and caring person. He has family and friends around him but the students are what bring more joy into his life. Whether it is getting a smile back in the hallway, or an intercom that Steve is needed in the office for a “special” clean up.