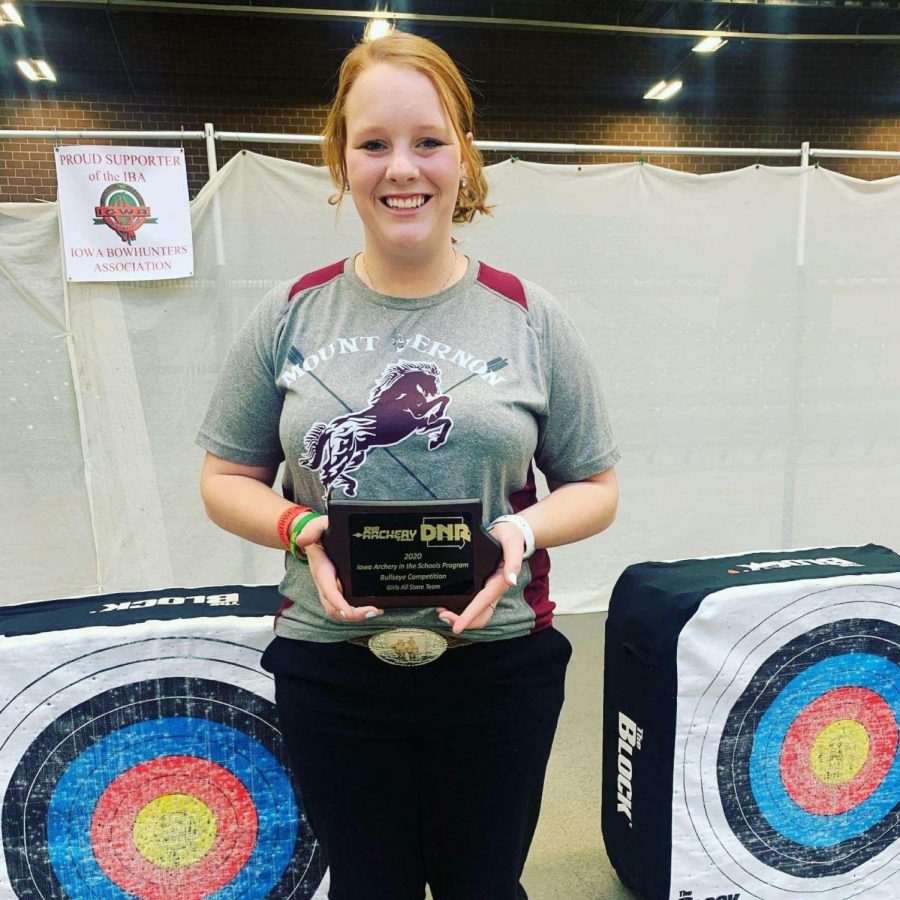 Senior Paige Emig smiles as she holds her award for placing fifth at state archery with a score of 290.

After a long season full of countless hours of hard work and dedication the Mount Vernon High School Archery team made it to state March 6-7.

In preparation, archers arrived as soon as an hour and a half early; for some, time seemed to pass quickly and others not fast enough. Coaches offered everyone good luck and a round of fist bumps in an effort to offer a sense of peace. Nerves arose into the air and eyes of the archers all around. However, MV was shooting for more than just themselves, they were shooting as a team for Coach Hallier.

The team was definitely nervous but you could feel the enthusiasm in the air. “I know we were all pretty excited to try our best for Chuck,” senior Paige Emig said. And they did.

With the sound of a whistle, every archer released each arrow with every ounce of their heart and skill that they had prepared to give at this moment. After a round of applause, the state tournament was over, and Mount Vernon High School placed 20th in the state. The middle school placed fourth, missing second place by two points.

“We worked really hard in order to earn that place at state,” junior Emily Benesh said.

Every last member deserved to be there and multiple archers received personal bests and other honors. Archers such as Emig earned a 290 in bullseye and placed fifth in all over high school girls. Especially archers like senior Logan Kelly who earned multiple scholarships at this tournament. Logan finished first place in 3-D with a score of 293, and placed seventh out of all senior boys in bullseye with a score of 288.

After expressing the gratitude he has for this opportunity, Logan stated, “I plan on going to Nationals and trying to make it on the podium.”