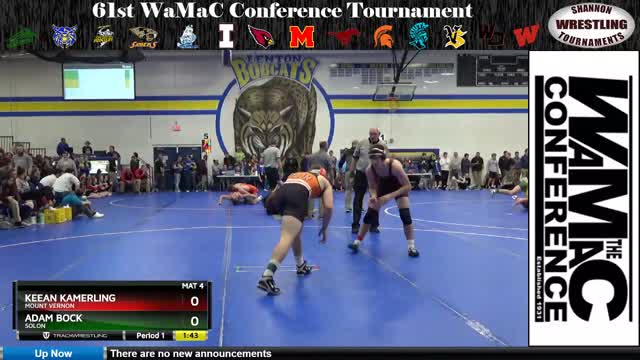 Kamerling at the WaMaC conference tournament

Deep breath in, deep breath out, a battle of strength is about to take place for junior wrestler Keean Kamerling. The crowd is cheering, Kamerling’s heart is racing, his blood is pumping, he’s ready for the fight. Having wrestled his whole life, Kamerling knows he is a worthy opponent to go up against and a force to be reckoned with.

“I love the feeling of victory and getting my hand raised after a match, it’s what motivates me to get better,” said Kamerling. On the mat two wrestlers must compete against each other to secure points for their team. Everyone must put in effort for the team to succeed, and that’s what Kamerling does. “What motivates me is bettering myself and working hard with my buddies and the people close to me,” said Kamerling. After school every day during the wrestling season Kamerling is putting in time to improve himself and others around him.

“He’s a leader,” said junior wrestler Tyler Stine. “He’s always motivating people to get better day in and day out.” Out of all of the moments in his career, Kamerling’s most memorable meet is the Central DeWitt meet because the team needed a pin and a decision to win the meet. “I remember before the match Walker Lawrence said to me ‘Hey no pressure, you need to pin this guy to win the duel’ so I had to focus up,” said Kamerling. Moments later Kamerling tossed his opponent to his back and pinned him, to win the duel along with the meet. This upcoming season Kamerling is going to wrestle in the weight class of 195, he’s working hard to gain weight to get into the weight class.

With a lifetime of experience behind him, Kamerling knows how to properly wrestle. Kamerling is a varsity wrestler for Mount Vernon High School and has competed in various clubs and camps throughout his career. “Keean is part of the reason I started wrestling, he has always been a leader on the team for as long as I can remember,” said junior wrestler Walker Lawrence. “Back in middle school Keean broke his leg making him unable to wrestle, but he kept his head up and still showed up to every practice and meet to support the team. It really shows how valuable of a wrestler he is,” said Lawrence.

Last year Paul Ryan (‘19) won the state title, Kamerling and Ryan were good friends on the wrestling team. Both of the wrestlers were some of the best on team and really made an impact. “It’s my dream,” said Kamerling. “I want to experience the feeling of a victory that important and make my team proud and represent who I am as a wrestler and teammate,” said Kamerling. Kamerling has had many role models throughout his life. Whether it be his parents, family, or someone he respects, Kamerling is always looking up to someone and putting in the work to be just like one of those people.

“A wrestler I really look up to is Kyle Snyder, he’s a really impressive wrestler and one that I respect,” said Kamerling. Snyder is an Olympic freestyle wrestler who is also the youngest Olympic gold medalist. Kamerling has big goals to achieve, he wants to win a state title for wrestling and even go to college to play football after high school. However, Kamerling puts in the work to achieve those goals, he always gives his best effort and is constantly trying to improve to reach his full potential.